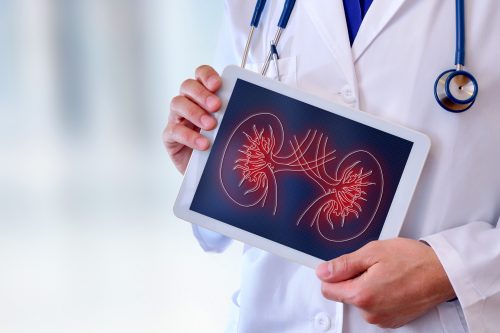 The management of advanced or metastatic renal cell carcinoma (RCC) has evolved dramatically in recent years with the evolution of combination immunotherapy as mainstream targeted strategy. A number of phase 3 clinical trials investigated immunotherapy-based combinations as first-line therapy in advanced RCC. Most of these combinations involved either two immune checkpoint inhibitors targeting the programmed death 1 (PD-1) or the PD-1 ligand (PD-L1) or cytotoxic T-lymphocyte-associated protein 4 (CTLA-4), or an immune checkpoint inhibitor plus a tyrosine kinase inhibitor (TKI) targeting the vascular endothelial growth factor (VEGF) or receptor (VEGFR).

The open-label phase 3 trial KEYNOTE 426 (NCT02853331) was set up to evaluate combination therapy consisting of the anti-PD-1 pembrolizumab plus the VEGF TKI, axitinib (pembrolizumab-axitinib) as first line therapy in patients with previously untreated advanced clear cell RCC. The investigative combination therapy was compared with sunitinib, standard therapy for advanced RCC at the time. The international, multicenter trial was begun in 2016 and to date has the longest follow-up for an immune checkpoint inhibitor (pembrolizumab) plus a VEGF/VEGFR inhibitor (axitinib) in treatment-naïve patients with advanced clear cell RCC.

A total of 432 patients were randomized on a 1:1 basis to treatment with pembrolizumab-axitinib and 429 to sunitinib. Baseline demographics and characteristics were balanced between the groups. Over 70% of patients were male and median age was 62 years. The majority of patients (56.2%) had intermediate risk disease as estimated by IMDC score, and among the 822 patients with evaluable tumor samples, more than half (60.5%) had PD-L1 expression.

Pembrolizumab was administered intravenously at a dose of 200 mg every 21 days for a maximum of 35 cycles and axitinib was given orally at 5 mg twice daily (with the option of increasing the dose to 7 mg, then 10 mg twice daily, or decreasing to 3 mg then 2 mg twice daily depending on safety criteria). Sunitinib was administered orally at a dose of  50 mg daily for the first 4 weeks of each 6-week cycle (with the option to reduce the dose in the event of toxic effects). Therapy was continued until disease progression, unacceptable toxic side effects, or patient- or provider-driven discontinuation.

The results of the first interim analysis of this trial, after a median follow-up of 12.8 months, were published in The New England Journal of Medicine in 2019.1 Patients on the pembrolizumab-axitinib treatment arm received treatment for a median of 10.4 months compared with 7.8 months on the sunitinib arm. The median daily dose of axitinib was 9.8 mg and of sunitinib was 50.0 mg. Patients most frequently discontinued the treatment due to evidence of disease progression with half of patients on the pembrolizumab-axitinib arm receiving subsequent therapy with a VEGF/VEGF receptor inhibitor.

The observed safety profiles of both treatments were consistent with what was already known about each of the three drugs, although there were more Grade 3 or 4 elevations in liver enzyme levels with pembrolizumab-axitinib than previously observed with each drug alone, which warranted further examination, the investigators commented. Grade ≥3 adverse events were reported in 75.8% of patients on pembrolizumab-axitinib and 70.6% of those on sunitinib. More patients on pembrolizumab discontinued treatment compared with sunitinib (30.5% vs 13.9%, respectively). The most common treatment-related adverse events experienced were diarrhea and hypertension.

Based on these results, the pembrolizumab-axitinib combination was approved by regulatory authorities worldwide, including the US Food and Drug Administration (FDA),2 as first-line treatment in patients with advanced RCC.

A further interim analysis of the KEYNOTE-426 data with longer follow-up (30.0 months) was published in The Lancet Oncology in 2020.2 The investigators reported continued clinical benefit with pembrolizumab plus axitinib over sunitinib. At data cutoff, 72% patients in the pembrolizumab-axitinib group and 81% of patients in the sunitinib group who received at least one dose of study treatment had permanently discontinued treatment, primarily due to radiographic disease progression. Median OS had not been reached with pembrolizumab-axitinib and was 37.5 months will sunitinib. No new safety signals had emerged. As in the first interim analysis, a higher incidence of grade ≥3 elevations in liver enzymes was seen with pembrolizumab-axitinib compared to either drug as monotherapy. The investigators cautioned that publication of the first interim analysis might have affected treatment decisions subsequently in the trial.

Data from the preplanned final efficacy and safety analysis from KEYNOTE-426, at a median follow-up of 42.8 months, were presented at the 2021 annual meeting of the American Society of Clinical Oncology (ASCO) by Brian I. Rini, MD (Vanderbilt-Ingram Cancer Center, Nashville).3 At data cut-off, 81.4% of patients on pembrolizumab-axitinib and 90.8% of patients on sunitinib had discontinued treatment. On the pembrolizumab-axitinib arm, 58.4% of patients had received subsequent therapy, mainly with VEGF/VEGFR inhibitors, compared with 73.0% of patients on the sunitinib arm, 74.4% of whom received a PD-1/PD-L1 inhibitor.

In another published report,5 the KEYNOTE-462 investigators reviewed the increased incidence of grade 3 and 4 elevations in liver enzymes (alanine aminotransferase [ALT] and aspartate aminotransferase [AST]) seen with pembrolizumab-axitinib in the trial. Approximately 25% of patients who received pembrolizumab-axitinib experienced an ALT ≥3 × ULN event, with a median time to onset of approximately 84 days. Most of these patients recovered following interruption of discontinuation of pembrolizumab or axitinib, with or without corticosteroid therapy and most were successfully rechallenged with study treatments after recovery. The trial investigators pointed out that all immune checkpoint inhibitors and TKIs are associated with liver toxicity, often revealed by elevations in AST/ALT and managed in different ways. They called for investigations into predictors or biomarkers of hepatic adverse events and treatment responses to allow planning of personalized treatments.

The KEYNOTE-426 trial has provided additional evidence for the long-term efficacy of a checkpoint inhibitor plus a TKI-VEGF inhibitor in patients with advanced or metastatic clear cell RCC. The combination of pembrolizumab plus axitinib has joined nivolumab plus ipilimumab and avelumab plus axitinib as standard of care front-line therapy for most of these patients. The decision about which combination to use should be based on consideration of many factors, including aggressiveness of disease, patient performance status, medical comorbidities, risk for toxicity, subsequent therapy options, and patient preferences, most commentators say.