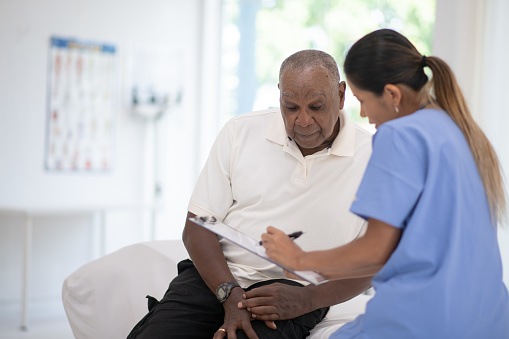 DURING THE KEYNOTE LECTURE at the 2021 ASCO Genitourinary Cancers Symposium, Dr. William G Kaelin, Jr, reviewed the concept of genetic interdependence between von Hippel-Lindau (VHL) disease and kidney cancer. Dr. Kaelin is Sidney Farber Professor of Medicine at the Dana-Farber Cancer Institute and Brigham and Women’s Hospital, Harvard Medical School, Boston. In 2019 he was one of the recipients of the Nobel Prize in Physiology or Medicine in recognition of his work on the mechanisms of cancer.

“My hypothesis, or conjecture, is that some of the mutations that occur late during the evolution of a tumor, whether as driver or passenger, are only tolerated because of the mutations that preceded them,” Dr. Kaelin declared. “If that is true, then targeting early mutations should selectively kill tumor cells, basically unmasking the otherwise deleterious consequences of these late mutations,” he suggested. He pointed to successes in targeting early mutations in other types of cancer, including HER2 in breast cancer and EGFR and ALK in lung cancer, BRCA1 in breast and ovarian cancer, and b-RAF in melanoma.

“So how do we know that inactivation of the VHL tumor suppressor gene is the initiating or early event in the development of clear cell renal cell carcinoma (ccRCC), the most common form of kidney cancer?” Dr. Kaelin asked. He explained that people born with a defective copy of the VHL gene develop paraneoplastic cysts—sometimes hundreds of them— that may develop into ccRCC. However, although inactivation of the VHL tumor suppressor gene is important, it is not the only factor at play in renal carcinogenesis. Nonetheless, VHL inactivation is “the initiating event,” Dr. Kaelin noted.

“Over time we have learned that the VHL protein is part of a ubiquitin ligase complex. In the presence of oxygen, it binds directly to the alpha subunit of the hypoxia-inducible factor (HIF-a) transcription factor and targets it for proteasomal degradation. In conditions of hypoxia, or when the VHL protein has been mutated, however, HIF-a can accumulate, dimerize with its partner protein HIF-b, ie, arylhydrocarbon receptor nuclear translocator (ARNT), and activate various HIF target genes, such as VEGF,” Dr. Kaelin explained. Further research confirmed the deregulation of HIF, in particular HIF-2, as the driving force in the development of ccRCC.

Commercial development of vascular endothelial growth factor (VEGF) inhibitors began about two decades ago, and a number of VEGF inhibitors have been approved for the treatment of kidney cancer. While many patients respond to these drugs, however, some do not, and even those who do respond are at risk of disease progression.

Dr. Kaelin suggested that instead of targeting a single HIF effector gene, it would be more logical to target HIF itself. However HIF was traditionally regarded as undruggable, Dr. Kaelin recalled. Nonetheless, researchers at UT Southwestern Medical Center (Dallas, TX) identified a potentially druggable pocket in the PAS-B domain of HIF-2a. They found chemical compounds that could bind to this pocket and in doing so, induce an allosteric change in HIF-2a such that it could no longer dimerize with ARNT and hence no longer bind to DNA.

Eventually, Dr. Kaelin and colleagues showed that a HIF-2a inhibitor, belzutifan (MK-6482), was highly active in VHL-defective kidney cancer. In a phase 2 study of MK- 6482 for treatment of VHL-associated ccRCC (updated at this meeting; Abstract 273), heavily pretreated patients (92% had received at least one VEGF inhibitor, and 81% an immune checkpoint inhibitor) still benefited from therapy. A phase 3 trial of belzutifan monotherapy in previously treated patients is ongoing.

Research has also been conducted into the use of belzutifan in a frontline setting in patients with diagnosed VHL disease based on germline mutation and no prior systemic anticancer therapy or metastatic disease. In this phase 2 trial, preliminary results of which were reported at the 2020 ASCO annual meeting, at the time of this analysis, “87% of the 61 patients in the trial at the time had measurable tumor shrinkage”, Dr. Kaelin recalled. “Around 40% had either a confirmed partial response or a partial response that was awaiting independent confirmation,” he added. Median progression-free survival had not been reached, and the 12-month progression-free survival was over 98%. With a confirmed overall response rate of 36.1% (95% confidence interval, 24.2-49.4), the results of this trial formed the basis for a New Drug Application (NDA) for belzutifan that was accepted and granted priority review by the U.S. Food and Drug Administration (FDA). However, the question of how to treat patients who have failed multiple therapies and who do not respond to HIF-2a inhibition, Dr. Kaelin stressed.

“We’ve had a longstanding interest in applying the concept of synthetic lethality to choosing cancer targets, particularly where a simultaneous mutation in two genes leads to lethality,” he said. We also knew that there was a lot of crosstalk between the VHL-HIF pathway and MET, and it appeared that VHL null renal carcinomas were, in fact, hypersensitive to the MET ligand, hepatocyte growth factor.” This supported a phase 3 trial of cabozantinib, an oral small molecule tyrosine kinase inhibitor that targets VEGF in addition to MET and AXL, in the treatment of kidney cancer patients who previously failed frontline therapy with a VEGF inhibitor (METEOR), in which patients treated with cabozantinib had longer PFS compared with everolimus. These data supported the approval of cabozantinib in advanced cancer. “I would be the first to point out that this is consistent with, but does not prove that cabozantinib is useful to inhibit MET in kidney cancer,” Dr. Kaelin cautioned. There are many other potential explanations for this difference, he noted, including the possibility that cabozantinib is simply a more effective VEG inhibitor than the VEGF inhibitor that these patients had been treated with previously, he suggested. Nonetheless, the data support the possibility that MET should be considered a potential target when treating kidney cancer.

Dr. Kaelin then addressed research aimed at identifying other synthetic lethal combinations including synthetic lethal screening with VHL null kidney cancer cell lines. “One of the hits from the screen was CDK4 and its paralog CDK6,” Dr. Kaelin said. “Interestingly, the synthetic lethality did not appear to be driven by HIF; it appeared to be HIF independent,” he recalled. The effect of CDK4/6 inhibition was shown to prolong survival in VHL-deficient, HIF independent kidney cancer models. Subsequently, studies were performed in which CDK4/6 inhibitors such as palbociclib were combined with a HIF-2 inhibitor. Outcomes were improved when tumors were treated with the combination versus palbociclib alone. Partly based on the results of these studies, a phase 2 trial is underway with the CDK4/6 inhibitor abemaciclib in advanced kidney cancer.

Dr. Kaelin then discussed immunotherapy, which he initially doubted would be successful, “but fortunately, other people did not give up, and they established that immuno- therapy is here to stay, starting with a landmark study with ipilimumab for the treatment of melanoma,” he recalled.

For Dr. Kaelin, however, the “eye-opening” experience was the clinical experience with anti-PD1 therapeutics, such as nivolumab in the treatment of non-small cell lung cancer (NSCLC), which, unlike melanoma, he had not considered as a particularly immunogenic tumor. Many NSCLC patients treated with nivolumab experienced tumor shrinkage, even long-term NSCLC survivors, he noted. Now numerous studies have supported the role of checkpoint inhibitors in advanced kidney cancer and the first and second line. However, although like melanoma, kidney cancer is highly immunogenic, unlike melanoma it does not carry a high mutational burden, which raises questions, Dr. Kaelin added.

A clue to this puzzle comes from the evaluation of patients who underwent allogeneic stem cell transplantation for advanced kidney cancer of whom nearly half achieved either a complete response (CR) or partial response. One patient who attained CR was found to have RCC-specific CD8+ T cell clone that killed clear cell RCC cells in an HLA A11 fashion. The T cell clone was found to target a novel antigen derived from human endogenous retrovirus type E (HERV-E) expressed in the patient’s ccRCC cells. HERV-E was expressed in the majority of ccRCC cells but not in normal tissues. Following this discovery, additional research identified a correlation between endogenous retroviruses in kidney cancers and their ability to respond to immune checkpoint blockade. HERV-E was directly regulated by HIF-2, which explained its upregulation in clear cell RCC. “Importantly, and perhaps fortuitously, this HERV-E actually does retain the ability to be translated into peptides that can then be recognized by the immune system,” said Dr. Kaelin, adding that current research is showing that “there are many, many other examples of endogenous retroviruses that are controlled by HIF-2a.”

In his closing remarks Dr. Kaelin asserted that if kidney cancer is ever to be cured, it will likely require three or four active drugs in combination. “Even if you had a really terrific drug, if one in a million cells are resistant to that drug, either because of genetic or epigenetic variation, then your chance of achieving cure with that single agent is going to be approximately zero,” he said. “You have to combine drugs that have distinct mechanisms of action, so hopefully they’re not cross-resistant with one another. and their toxicities won’t overlap in a prohibitive way,” he concluded.