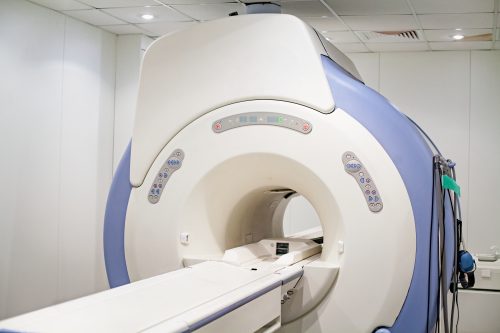 IN A SCIENTIFIC SESSION presented at the Society of Nuclear Medicine and Molecular Imaging meeting, several researchers discussed the efficacy of various imaging modalities to diagnose different cancers, in a session called “Advances in PET Imaging for Cancer: Highlights of Clinical Diagnostics in Oncology.”

Dr. Rowe noted that piflufolastat F 18 is a urea-based small molecule that targets the outside domain of prostate-specific membrane antigen (PSMA). It contains a lysine sinker that binds the urea-based portion of the molecule to the radionuclide bearing moiety. Essentially, by connecting to the target, the imaging agent enables accurate reading of the PET scan to detect and locate the cancer.

The population of interest were patients with biochemically recurrent disease by either American Urological Association (AUA) or Phoenix criteria. They also had to have negative or equivocal standard-of-care images. Patients were excluded from analysis if they received recent or ongoing systematic therapy. The primary endpoint in CONDOR was correct localization rate, defined as a positive predictive value at the patient level, with an additional requirement of anatomic lesion colocalization between piflufolastat F 18 PET/CT and composite standard of truth. The composite standard of truth consisted of histopathology, subsequent correlative imaging findings, or post-radiation prostate-specific antigen (PSA) response. Dr. Rowe noted that the trial was considered successful when lower bound of the 95% confidence interval for CLR exceeded 20% for two of three central readers. Final analysis included 208 men with a median baseline PSMA 0.8 ng/mL.

“Piflufolastat F 18 PET/CT detected and localized metastatic lesions with high positive predictive value, regardless of anatomic region,” Dr. Rowe said of the results. “Men with biochemically recurrent prostate cancer had negative or equivocal baseline imaging. If we take just a subset of men that had truly metastatic M1 disease, the positive predictive values were higher for pelvic lymph nodes and bone, compared to the viscera or soft tissues.”

The next speaker in this session, Chunxia Qin, MD, PhD, Tongi Medical College, Wuhan, China, presented a head-to-head comparison of fibroblast activation protein inhibitor (FAPI) and fluorodeoxyglucose (FDG) PET/MR in patients with nasopharyngeal carcinoma (NPC), which is common in southern China. The clinical objective of this study, according to Dr. Qin, was to investigate whether simultaneous FAPI head-neck PET/ MRI is superior to FDG PET/MR in NPC patients and to assess the clinical efficacy of both modalities.

Fifteen patients (8 men, 7 women) were enrolled in this prospective study between June and August 2020. Fourteen patients were newly diagnosed with NPC and one had recurrent NPC. The population of interest underwent both head and neck FAPI PET/MR and FDG PET/MR within one week.

The analysis showed that FAPI outperformed FDG, and Dr. Qin detailed its performance in a few case examples. For example, in a 50-year-old man, FAPI revealed the involvement of occipital scalp with better clarity. In another case of a 50-year-old woman, the extent of parapharyngeal space invasion was observed to be larger with FAPI PET compared to FDG PET. Moreover, the results showed that T staging of FAPI was consistent with MR findings in all patients, while one patient was underestimated by FDG.

“In conclusion, FAPI outperforms FDG in delineation of primary tumors and the detection of suspicious distant metastases. Simultaneous FAPI PET/MR may serve as a single-step staging modality for patients with NPC,” Dr. Qin said.

The results of the study demonstrated that, in treatment-naive patients, FAPI PET/CT upstaged the clinical TNM staging in 21% patients, compared with FDG PET/CT. In patients with tumor recurrence, the true-positive rates for FDG and FAPI PET/CT were the 44% and 100%, respectively, Dr. Pang noted. Furthermore, FAPI PET/CT showed a higher tracer uptake in primary tumor-involved lymph nodes and distant metastases than FDG PET/CT. The researchers also observed that FAPI PET/CT showed a higher sensitivity in the detection of lymph node metastases.

Next, Lukas Kessler, MD, University Hospital Essen, Germany, shared data from a prospective observational trial of FAPI PET. The study assessed 44 patients who either received the clinical indicators for FAPI PET or had sarcoma.

The primary endpoint for this trial was the association of FAPI PET tracer uptake intensity and the histopathologic FAP expression. “[This endpoint] has only been shown in murine models so far. So, we wanted to show this in vivo,” Dr. Kessler said. “Secondary endpoints were the detection rates and the positive predictive value on a per-patient and per-region level, as well as sensitivity and specificity of FAPI PET, both confirmed by histopathology on biopsy.”

After the primary endpoint was met, Dr. Kessler and colleagues then sought to discern a correlation between FAPI tracer uptake and histochemistry. The results showed a significant positive correlation for the higher FAP. “The sensitivity was 69% on a per-patient basis and 94% on a per-region basis,” he reported. “The detection rate compared to FDG PET was comparable, with slight variations in nodal stages, with slightly higher detection rates for FDG PET.”

Next in the scientific session was a presentation by Mohammad Naghavi-Bezhad, Department of Nuclear Medicine, Odense University Hospital, Denmark, who discussed the findings of a study focused on response-monitoring methods in patients with metastatic breast cancer.

The main question Dr. Naghavi-Bezhad posed was: Does using FDG PET/CT in response monitoring of metastatic breast cancer increase the patient’s overall survival or not? To answer this question, his team designed a retrospective, single-center study. All patients had biopsy-verified metastatic breast cancer and were followed at the hospital’s Department of Oncology regularly, Dr. Naghavi-Bezhad noted.

The study consisted of 300 patients (144 in the CT scan group, 83 in the PET group, and 73 in the combined group). “Due to nature of retrospective design of the study, we didn’t have chance to go for randomization, so we checked our study goal for baseline characteristics,” Dr. Naghavi-Bezhad said. “Our study goals were mainly comparable. The few significant difference within the study were not in favor of any specific group. For example, we had higher liver metastases in the CT group, and we had a higher biopsy there for lung metastases in the PET group.”

According to the results, among all different kinetic parameters and traditional SUVmax, Ki-67 was shown to provide the highest diagnostic efficiency, making it a promising indicator in the differential diagnosis of benign and malignant lymph nodes.